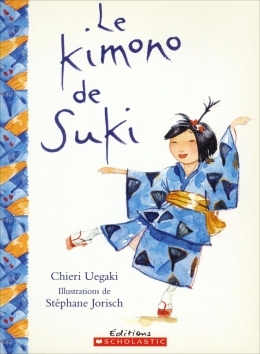 Summary: It is the first day of school. Suki wants to wear the kimono that her grandmother gave her. She wears it proudly even though the other children and even her sisters make fun of her in the playground before the bell. In class, Suki has to introduce herself. How are the other children going to react, and how will Suki feel?

Chieri Uegaki is a second-generation Japanese Canadian born in Quesnel, BC. When she was one, she and her parents moved to East Vancouver where she and her sisters grew up. She is a graduate of the University of British Columbia Creative Writing program. Suki’s Kimono is her first published book and won her the International Reading Association’s Children’s Book Award Notable Book award.

.Stéphane Jorisch has won multiple awards, among which are the Governor General’s Award for Children’s Illustration (twice!) and the Parents’ Choice Award. The two creators continue to work together.