The four WITS strategies were created by an unknown source on Vancouver Island. The first documented use was in 1993 at Lampson Street Elementary School in Esquimalt BC, where Principal Judi Stevenson had been teaching students its four simple conflict resolution strategies:

These WITS strategies were soon adopted by other local educators, and “using your WITS” quickly became a common phrase at schools in Greater Victoria.

After seeing the WITS strategies at work, Tom Woods, a school police liaison officer, sought to broaden its reach. In 1997, he launched the Rock Solid Foundation in collaboration with local athletes and law enforcement officials. Its mission: Provide violence prevention programs to children and youth.

Wanting to widen WITS’ impact as part of Rock Solid’s efforts, Woods developed additional program elements with Stevenson, local athletes and other collaborators. Greater Victoria School District 61 saw its potential and assigned teachers and counselors to work with Rock Solid to review this new WITS Program. Then, from 2004-2009 a University of Victoria research team partnered with Rock Solid and contributed significantly to its implementation, evaluation and associated educational materials.

These collaborations enabled the simple set of WITS strategies to evolve into a full fledged WITS Program, based on literacy and centered on a whole-community approach. 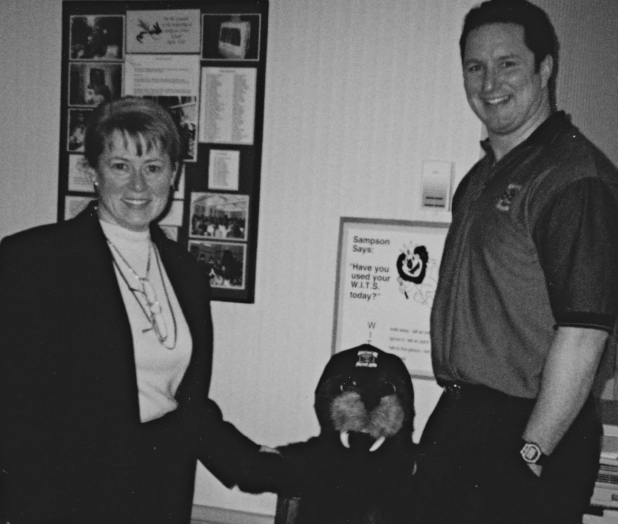 Judi Stevenson with Tom Woods in 1998. The original WITS strategies are behind mascot WITsup the walrus.

I found the WITS Program to be an exceptional tool to help children learn at an early age how to deal with peer victimization, and how important it is to treat each other with respect. Until bullying and peer victimization are a thing of the past, I strongly encourage other schools to implement the WITS program on an annual basis.

As the WITS Primary Program spread to Greater Victoria area schools, a question emerged. Where do older students fit in? If WITS was meant as a whole school approach to preventing peer victimization, students in Grades 4 to 6 would also need to be included.

The Rock Solid Foundation and UVic began collaborating with Frank Hobbs and Lake Hill Elementary Schools in Victoria to develop the WITS LEADS Program for students in Grades 4 to 6 (flexible based on the school).

The program reflects older children’s ability to understand other’s perspectives and recognizes them as leaders capable of making their schools and communities safer places for younger children. The LEADS acronym stands for a problem-solving approach to peer conflicts:

The LEADS strategies were piloted in 2005 in Victoria, BC and made widely available in 2006.

In 2011, WITS began working with the Royal Canadian Mounted Police to share the WITS message across the country, especially in rural areas. This partnership was the perfect opportunity to adapt the programs into the French language. This was accomplished through a partnership with the Francophone Education Authority of British Columbia. The DIRE (WITS) and MENTOR (WITS LEADS) programs were piloted during the 2012-2013 school year are now fully available for use in both Francophone and French Immersion schools.

Foundation team in 2018 at the 20th Anniversary Celebration, held at the Songhees Wellness Centre.

In 2015, the University of Victoria part of the WITS operations closed and all aspects of WITS (in any language) were assigned back to RSF. With their only initiative being the WITS group (WITS, LEADS, DIRE and MENTOR), the society changed its name to ‘WITS Programs Foundation’ (WPF).

Since then, the WITS Programs have spread far and wide. WITS is in more than 1500 schools worldwide, earning endorsements from several authors and organizations. It has been used as a model to develop DIGA, a unique Portuguese version in Brazil, and WITS is being used by schools in four continents.

In 2020, program offerings expanded. WPF partnered with Pink Shirt Day co-founder Travis Price to deliver their combined messages to children and youth on Canada’s Pink Shirt Day every February. With support from Heritage Canada, WPF created and piloted Canadian Kindness Leaders (CKL) in 36 schools in four provinces. CKL empowers youth to develop and implement their own projects centred around kindness (see the navigation menu for more).

In a major design and effectiveness upgrade, the WITS group of programs were completely updated in WITS 2.0. This range of program improvements carefully considered accessibility, inclusion, and diversity in their designs. Classroom posters, take-home cards, and other materials have been redesigned. There are new self-directed online educator & community leader training courses. The new module ordering system makes it simpler to start a WITS program, including new easy-to-use implementation guides that are included in every classroom module.

Continuing with our literacy-based approach, our team of educators now vets many more new books, including those that align with modern Social-Emotional Learning themes in a new series called WITS Recommends. Yes, we provide lesson plans for these books too!

Now, WPF is constantly developing new tools and programming. The Foundation will continue to innovate, partner and have a positive impact on communities via WITS, Pink Shirt Day Canada and Canadian Kindness Leaders.

Stay up to date with WITS News and Events